For official information on the COVID-19 outbreak in South Africa, go to www.sacoronavirus.co.za
You are here: home > whats hot > latest news > dissolving biofilms with a yeast based solution

Dissolving biofilms with a yeast-based solution

Growing inside pipes and on surfaces, bacterial biofilms can cause headaches for the food processing industry.

Removal of biofilms is crucial for the food industry, as they can potentially cause large-scale product contamination. Harsh cleaning products and detergents called surfactants combined with scrubbing are the most effective methods of removing biofilms. However, biofilms are notoriously difficult to eliminate as one of their main functions is to protect encased bacteria from threats such as chemical cleaning agents, and the agents themselves can also sometimes cause issues for the environment and may damage the some surfaces.

Now researchers from the University of Tsukuba have shown that enzymes produced by yeasts — called biosurfactants — can dissolve stubborn biofilms and improve the efficacy of current chemical treatments, thus also lessening their toxicity and environmental impacts.

In a study published in peer-reviewed journal Langmuir, the researchers explain the new method of tackling biofilms, using cleaning agents derived from microbes themselves.

“Certain Candida yeasts can naturally produce biosurfactants called sophorolipids during the fermentation of oils,” explained co-lead author Professor Andrew Utada. “Previous studies have shown that sophorolipids have some degree of antimicrobial activity, but there is conflicting information on the effects of these compounds on biofilms composed of the Gram-negative pathogen Pseudomonas aeruginosa.”

Gram-negative bacteria such as P. aeruginosa and Escherichia coli are a major cause of hospital-acquired infections, killing thousands of people every year. Using microfluidic channels, the researchers showed that sophorolipids do a better job of disrupting established P. aeruginosa biofilms than commonly used chemical surfactants. 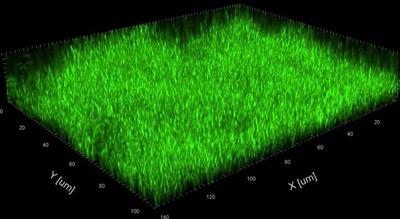 Confocal image of a typical mature biofilm taken at 12 h. The bacteria are labelled with the DNA stain DAPI but are shown here in green for clarity. Image credit: University of Tsukuba.