Cape Town's Sulailah Murphy was taking a short break outside the shop she and her husband own on Wetton Road in Ottery when people suddenly started collapsing on the pavement on Monday.

A vehicle had been handing out food and drinks earlier to people along the road when the events unfolded, she said.

"Suddenly, they just started dropping. They downed the liquid and they dropped, one after the other," Murphy said.

"I was running up and down the street helping people"

Kaashief Bassadien, a customer at their shop Southern Boards, said it was chaos as people were collapsing all along the road.

"There were about 12 people," he said of the number originally affected by varying degrees of breathing difficulties and vomiting.

"I was running up and down the street helping people," added Bassadien, who said he was also part of community safety initiatives and knew some First Aid.

"One man was battling to breathe. He was breathing hard and I tried to keep him calm. He eventually started breathing properly, and vomited," he said. 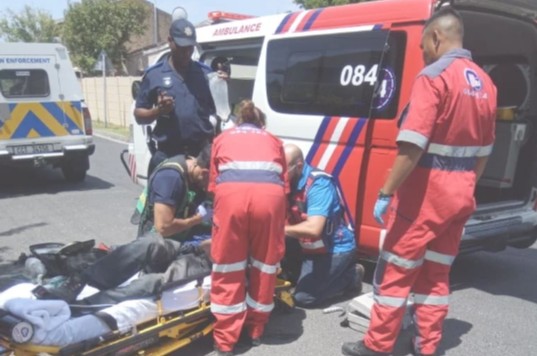 Murphy said she managed to flag down a passing ER24 ambulance.

Both said they recognised the people who had accepted the offerings of food and drink as people who walk up and down Wetton Road in the hopes of finding work.

A busy scrap-metal dealer is also near one of the collapse sites, where people line up with trolleys full of scrap they hope to sell.

The City of Cape Town's Law Enforcement unit happened to be patrolling in the area and they were flagged down and found three men and one woman who had collapsed at a bus stop.

Spokesperson Wayne Dyason said: "They were busy receiving medical attention from paramedics on the scene and one of them was experiencing convulsions."

Six people are in serious to critical conditions after a suspected poisoning incident. (Jenni Evans, News24)

While the paramedics were working, it was reported that another person was lying on the pavement on Walnut Road and another on the corner of St Joseph's and Wetton roads.

ER24 spokesperson Russel Meiring said the patients had collapsed at three different locations along the road.

"ER24, Life Healthcare and Western Cape Metro Services arrived on the scene. We found that five were in a critical condition while the sixth was in a serious condition."

They were treated and transported to provincial hospitals.

News24 approached the premises where the food and beverages were said to have come from but was told there was nobody to speak about the incident.

A man eating a large portion of savoury mince from an ice cream tub said he was eating the same food that had been handed out and he was fine.