You are here: home > whats hot > Latest News > Global food producers 'failing to face up to role' in climate crisis

Report urges meat, dairy and seafood companies to address impact of industry’s deforestation, use of antibiotics and emissions 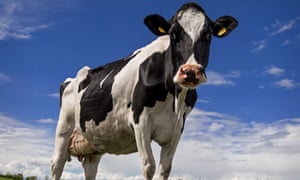 The Coller Fairr report comes from investment experts who want to encourage awareness of risks to the planet – and to profitability – in food production. Photograph: Alan Hopps/Getty Images

The world’s biggest producers of meat, dairy and seafood are failing to tackle the enormous impact they are having on the planet through deforestation, the routine use of antibiotics and greenhouse gas emissions, a report warns.

The Coller Fairr index ranks 50 of the largest global meat, dairy and fish producers by looking at risk factors from use of antibiotics to deforestation and labour abuses. The producers are the “hidden” supply chain, providing meat and dairy to global brands including McDonald’s, Tesco, Nestlé and Walmart.

The index is written by investment experts who want to encourage awareness of the risks posed to the planet – and to their own profitability – by companies that fail to mitigate the damage done to the environment by food production.

Jeremy Coller is founder of Fairr and chief investment officer at Coller Capital. He says it is the huge companies behind the brands that will themselves suffer if the planet isn’t protected. “It is the companies hidden upstream in the meat and dairy supply chain who face the most significant climate and public health risks.

“As last month’s landmark report from the Intergovernmental Panel on Climate Change (IPCC) demonstrated, the world’s meat, fish and dairy industries are under serious threat from climate change impacts. In stark contrast to the transport sector, only one in four meat, fish and dairy producers even measure their greenhouse gas emissions, let alone act to reduce them.”

Among other failings, the index says that none of the companies analysed have a comprehensive policy to stop deforestation. And just four companies in the index “have committed to phasing out routine use of antibiotics, widespread in the industry”.

According to the report, two-thirds of producers do not even measure all their greenhouse gas emissions let alone set targets to reduce them. These include Hormel Foods in the US, a supplier to McDonald’s. Also included is Cal-Maine Foods. Cal-Maine is the largest producer of fresh eggs in the US and a supplier to Walmart and Nestle. Nestlé, McDonald’s and Walmart have all publicly committed to reduce greenhouse gas emissions.

And while Walmart has previously said it wants to achieve zero net deforestation in its supply chain by 2020, the research shows that Walmart suppliers such as Cranswick in the UK have no comprehensive policy on deforestation. McDonald’s have pledged to reduce antibiotics use in their beef supply chains. But the vast majority of beef suppliers do not have a policy to avoid routine use of antibiotics. Only one – Marfrig – does.

The companies are ranked according to their risk for investors, based on analysis of nine key environmental, social and governance risk factors, combined with the sustainable development goals. The Hong Kong-based WH Group were noted as “high risk” while Hormel Foods and Cranswick were designated as “medium risk”.

The research argues that some of the companies, who between them have a value of $300bn (£248bn), are already suffering the costs of the deepening climate crisis.

Cal-Maine Foods reported a 30% decline in revenues in the last quarter of the year alone due to extreme weather.

Peter Van der Werf is an engagement specialist at investment firm Robeco, advising on how to invest sustainably. He told the Guardian that research into the environmental risks of food production is vital.

“This is very important research. As investment managers we take a lot of care assessing risk – for example an analyst looking at food production needs to have a good understanding of climate change risks … like deforestation, loss of feed supply that comes through cattle grazing on depleted land, use of water.”

Van der Werf says that he can see progress being made as producers are made aware of the benefit of considering environmental risks.

“Companies were previously reluctant to show an interest in alternative proteins like fake meat, but we have seen a huge growth in demand. We started engagement over labour safety and use of antibiotics and over three years we have clearly seen an engagement and awareness. Now Tyson Foods, for example, has climate targets. They didn’t have that before.”

He says the end aim is for producers and investors to move away from meat and fish as protein sources as much as possible.

“The fires we have seen in the Amazon have come up in conversations with investors. They are concerned about climate change, about forest fires. There is a global need to further reduce reliance on meat and dairy and look at different protein choices.”

A spokesman for the National Farmers’ Union told the Guardian that there is a commitment to achieving net zero carbon emissions in the UK farming industry by 2040. He said this will be achieved through improving efficiency and animal welfare, managing carbon storage on farms and boosting renewable energy.

The Guardian contacted the companies named but at the time of publication had not received responses from all of them.

Nestle said: “The Nestlé Responsible Sourcing Standard sets out sustainability practices that we ask our suppliers, their employees, agents and subcontractors to respect and adhere to at all times. In addition, we run a responsible sourcing program for 15 high-priority raw materials, including meat, poultry and eggs and dairy. For these materials, our work starts by mapping our supply chain all the way down to the farm or slaughterhouse. When suppliers refuse to improve, we will remove them from our supply chain.”

Walmart said: “We believe that both collaborative action and traceability across our global supply chain are needed to reduce deforestation associated with the production of beef and soy in Brazil. We’re working with the Consumer Goods Forum, the Tropical Forest Alliance and the Statement of Support Group for the Cerrado Manifesto as we work toward our goal to reduce deforestation.”

A Tesco spokesperson said: “Food is at the heart of our business, and our commitment to sustainable sourcing is recognised by FAIRR both in this report and its recent ‘Appetite for disruption’ report, where Tesco topped the retail ranking for our focus on sustainable protein. We set ourselves ambitious and transparent sustainability targets, including across carbon reduction, biodiversity and tackling deforestation, which we will meet through working in partnership with our suppliers.”

Tyson Foods said: “We recently announced a science-based target to decrease greenhouse gas emissions 30% by 2030 as well as a partnership with Environmental Defense Fund focused on increasing sustainable farming practices on more than 2m acres of row crop corn by 2020. This is the largest commitment ever made by a US protein company, and we will be reporting on our progress over time.”

Hormel said: “As a global branded food company, we take our sustainability practices very seriously. We are working toward achieving our 2020 goals for reducing greenhouse gas emissions and non-renewable energy use by 10% by 2020.

“We are pleased to see the report highlighted our company as one of the leaders in the industry and showcased Hormel Foods for our best practices for water usage. Additionally, the report singled out Hormel Foods as being the only company that has established a sustainable agricultural policy that extends to feed-grain growers.”